Ten Reasons to Oppose the Wall Street Bailout
1. NO REFORM: The plan
attempts to mask, rather than reform, imbalances in credit markets and in U.S.
economic public policy. The plan props up reckless and failed banks by buying
“troubled assets” instead of focusing on real reforms that go after government
sponsored culprits Fannie Mae and Freddie Mac, and sustainable policies that
will increase the availability of private capital and expanded economic
growth.
2. TREASURY POWER GRAB: The plan raises Constitutional
concerns by dramatically expanding the power of the current and future Treasury
Secretaries, giving the government agency power to directly purchase assets from
for-profit financial and non-financial firms.
3. STUNNING PRICE TAG: The $700
billion bailout figure is as much money as the combined annual budgets of the
Departments of Defense, Education and Health and Human Services. It amounts to
$2,300 for every man, woman, and child in America.
4. INCREASES
NATIONAL DEBT: Instead of cutting spending elsewhere, Congress will borrow all
$700 billion on global capital markets, and the bill raises the national debt
ceiling to a staggering $11.3 trillion.
5. GLOBAL BAILOUT: The plan includes
taxpayer purchases of distressed assets from foreign banks.
6. HURTS
RESPONSIBLE AMERICAN BANKS: The plan punishes responsible U.S. banks by keeping
reckless, insolvent investment banks in business. As BB&T CEO John Allison
wrote in a letter to Congress on Sept. 23rd, “….this is primarily a bailout of
poorly run financial institutions…. Corrections are not all bad. The market
correction process eliminates irrational competitors.”
7. FLAWED PROCESS:
Members of Congress and the public will have less than 24 hours and no hearings
to discuss and understand the impact of this sweeping plan. This rush to pass a
wildly unpopular plan without benefit of significant public debate and input
will also undermine its legitimacy and effectiveness.
8. BY WALL STREET, FOR
WALL STREET: Treasury Secretary Paulson, the architect of the plan, was formerly
the head of Goldman Sachs, one of the firms responsible for the mess and a
direct beneficiary of the bailout. Further, the advisers managing the
bailout auctions and assets will be Wall Street firms and will likely receive
billions of tax dollars in fees.
9. OTHER OPTIONS NOT EXHAUSTED: The idea
that taxpayers will make money on the bailout is not credible. There are ready
buyers for these “troubled assets” — Merrill Lynch sold its entire portfolio of
mortgage backed securities in July– provided the price is low enough. If a
profit was possible, private speculators would readily buy these troubled
assets.
10. MORALLY OFFENSIVE: The plan violates basic principles of American
capitalism and honest governance by creating a system of “private profits,
socialized losses” that transfers money from taxpayers directly to Wall Street
investment banks. Free market capitalism only functions if individuals and firms
are held accountable and are allowed to both succeed and profit, and also to
sustain losses and even fail. 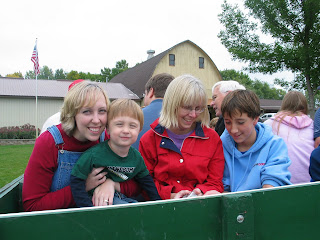 Audrey turns two tomorrow. We had a fun time celebrating her birthday today. Dad and Brian came. So did the Fairchild’s and the Friesens. We checked out the local orchard right outside of town (we’re planning on going to another orchard in Delano soon, but I thought it would be easier to do a smaller, closer one today), picked a couple of apples, played with the kids toys and took a hayride. Then we came back and had lunch, opened presents and had cake. Audrey got to stay up until about 1:45 (was it that late, I don’t remember). She had a really great nap!

We got to see Chloe today. Ethan was very sweet around her and he is now calling Erica, “Baby Chloe’s Mommy”. He’s known her as Erica for 3 1/2 years, but she has a new identity now! Here are some photos from today! 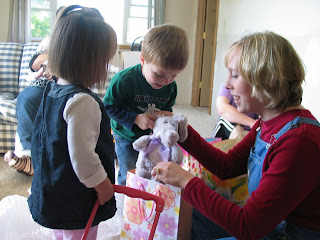 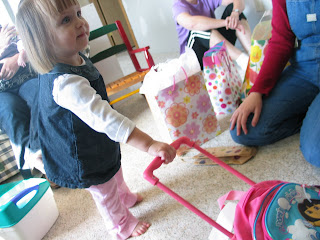 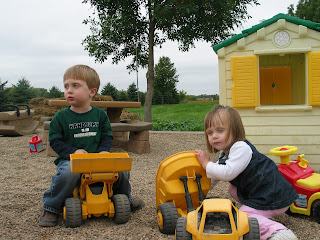 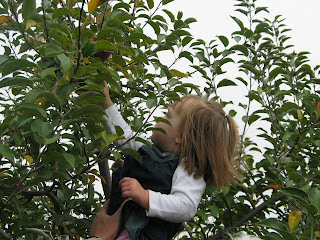 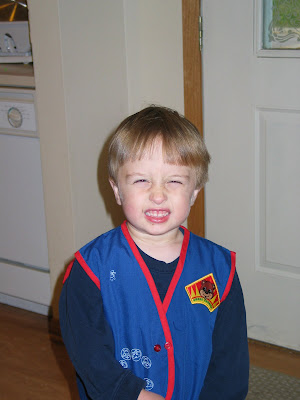 Look at this kid! Can you believe he’s in Awana now? Sure, he’s on the young side, but he learned 3 verses last week and I am so proud of him.

So, here’s what has been happening here:
Nathan and I are working on eating better. We started up again a week ago Monday and Nathan has lost 7 lbs and I’ve lost 4. I’m so proud of Nathan! Audrey is talking a little more and she actually went potty for us a couple of times this week. In a couple of days Audrey will be 2! It’s gone fast.

My Bible study on Daniel started about two weeks ago. There are 18 of us that meet on Monday nights. I’ve already learned a lot and I’m very excited about next week when we talk about the fiery furnace. I hope everyone can make it because I know it will be a great video session.

I’m a little bummed that it looks like it’s going to rain on Saturday. I was hoping we could celebrate Audrey’s birthday by going to the apple orchard. If it rains, we’ll have to hang out here and I’m having a hard time thinking of creative things to everyone to do. Hmmmm…..

I suppose I should clean. I just thought I would do a quick post! 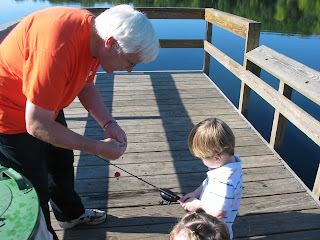 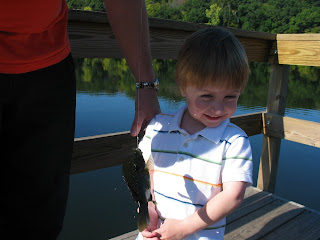 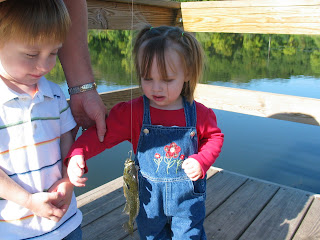 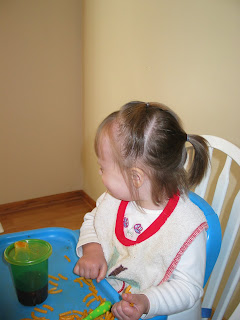 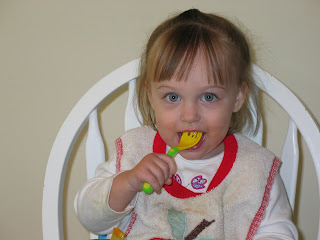 Audrey has enough hair for two pony tails now! Oh the joy of being a girl!

We are very priviledged to live in a country where we get to freely vote for whatever candidate we choose. There are many societies that don’t get to do that. Have you ever stopped to think about what an amazing thing it is, that after a presidential election, power changes hands so seamlessly? It’s pretty cool!
I plan to vote. I don’t think my candidate is perfect. I don’t agree with everything he has said and done personally and politically. I don’t think I’m more spiritual or any more of a Christian than someone who doesn’t vote the way that I do. I am going to assume that you are making an informed decision when you cast your vote. Fans of the person who is getting my vote will say negative things about the opposition. Fans of the person who is not getting my vote will say negative things about their opposition. There are truths and lies on both sides.

Guess what? I don’t care to hear it anymore.

I’m planning on voting on the issues. I hope you do too. Find out what are the non-negotiables for you, and vote accordingly. There probably isn’t a perfect candidate out there that agrees with you on every last thing, but make a good faith effort to find out all you can about the things that you think matter most and vote your conscience.

That said, I believe that there is a lot of power in politics, but I don’t put my faith in politicians. If my candidate doesn’t win the election, I wont be devastated. God has no less power with one party in office over another. Obedience to God’s leading in my everyday life is the most important thing.

Why I have the greatest life ever:

I get to hug and kiss my kids all day- whenever I want!
Making forts out of blankets
Watching Sid the Science Kid 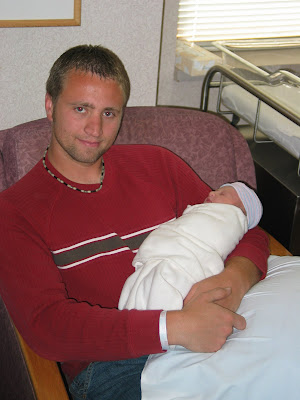 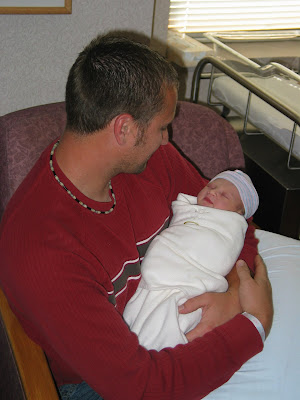 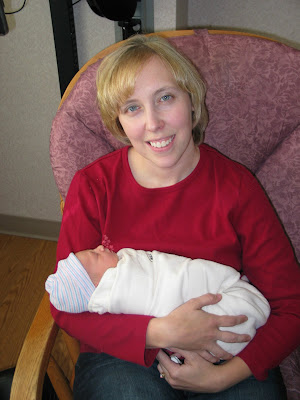 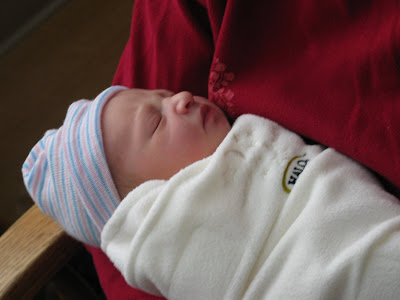 Sorry, we didn’t think to take a picture of Erica until she started eating. . . Tim thought it would be better to get one without food later! She has dark hair and she is the most mellow little thing. She scrunched up her nose once, but that was the extent of her unhappiness while we were there!

So tired today. I didn’t sleep much because I couldn’t stop thinking about Erica and wondering if the baby was born yet. I’m sure my exhaustion is nothing compared to Erica’s!
Still waiting anxiously to hear. We can’t wait to see her.

I forgot to add an exciting piece of news in the previous post.

I registered Ethan for Awana today! He’s going to love it. Our small group meets at church on Wednesday nights and that’s where they do Awana. If we weren’t already going to be there, I probably would have waited another year before signing him up. I’m sure I’m more excited about it then he is. I am so excited!!!!!!!!!!!!!!!

I love the cooler fall weather. We can still enjoy being outside and we can dig out our cozy long sleeve stuff and long pants. I’m loving my new jeans that I bought on sale online (Old Navy $12 sale!!). They actually fit (you never really know when you can’t try them on) so I’m very excited.

We’re taking off for Tabor Lake this coming weekend. There was a cancellation and since we didn’t get to use the time we reserved earlier this summer, it was offered to us. It should be a fun experience for the kids.

One more week until the Daniel Bible Study kicks off. There are 12 people (inlcuding me) signed up for it. I’m looking forward to learning and getting to know the women in the group better.

We’re all eagerly anticipating the arrival to Tim and Erica’s daughter. Hopefully she makes her arrival this week. Today would be great!