The sun is shining today and it feels like a Friday! The kids both napped (Ethan is still napping). Audrey talked for quite a while so I don’t know why she is awake now, but she is happily running through the house.

Ethan earned another patch in Cubbies last night. Now, I have two things to put on his vest. I’m thinking I’ll just use fabric glue!

Zemirah, Ethan’s friend, is here for the night. Her momma had a baby girl this evening. Happy Birth-day Elora (I think that’s how it’s spelled)! Ethan was thrilled to have her here to play with him for the entire afternoon!

Tuesday is also storytime at the library. Today was “D” day. They heard stories about dogs and dinosaurs. Then they colored pictures of dump trucks and dogs and did rubbings of dinosaurs. We had some artwork to show Daddy tonight! 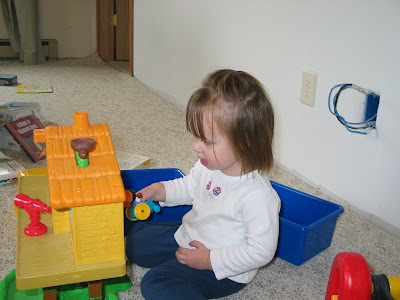 We made it through another week! It was kind of cold out the last couple of days and I’m being reminded of what it’s like to stay inside for the day. It’s not as much fun and the house gets much messier. I’m considering moving all the toys downstairs. Wouldn’t it be nice if only one room of the house had toys all over? Am I dreaming?
We played with the Little People school bus and farm and the Diego rescue center this afternoon. I tried to get a picture of Ethan, but he was too busy and didn’t want me to do it. This is a picture of Audrey playing with the Little People in the “Rescue Center”. Look, a freshly primed wall behind her! Progress.
Tonight we went to Country Kitchen for supper. The kids like the Mr. Chippy Pancakes and it was a nice break from cooking. When we came back we cleaned and read a story. Daddy did voices and it was great!

After yesterday’s excitement, today wasn’t nearly as eventful.
We Ethan and Audrey got to play with Ezekiel, Zemirah and Gideon this morning while their mom had a doctor appointment (39 weeks now?). They are getting ready for a new baby sister. You can come out now, Baby! Your mommy is ready!

I made a new recipe tonight that most of you will probably think sounds disgusting. Nathan and I really liked it though and Ethan liked it too. 3 out of 4 isn’t bad. This is what I made. My aunt used to make them and I thought I would give it a try. They were relatively easy and had a nice mild taste.

Ethan and I had so much fun playing with his hot wheels car launcher this afternoon. I can’t trying it and it wouldn’t work for me. The car would get jammed or it would flip when it launched and I would say, “What!?” Each time Ethan would laugh hysterically. I live listening to a belly laugh from him. He was practically laying on the floor laughing.

Audrey seems fully recovered from her injury. Nathan shared his story at work today and was regaled with many different stories from other parents of how they injured their children. Apparently, we’re in good company.

Randy Alcorn has a way with words that I don’t have. Perhaps that’s how he is able to make his living as an author! I’ve debated whether I should post this link or not. For those of you who may not agree with me politically, I hope you can at least respect that I stand up for what I believe. I am not willing to take the gamble that the abortion rates might continue to go down regardless of the President. The truth is we really don’t know what would happen with a Congress and President who are both committed to removing all restrictions on abortion. If it was a good friend or family member whose life was at stake, would I be willing to take that chance? I’m disallowing comments because I don’t wont this blog to turn into a place for debate. I’m really not assuming that I am going to change anyone’s mind, but I thought this would be a good explanation for why I feel strongly about this.

Here’s a quote from the article:

Now, when someone says, “But still, abortion isn’t the only issue,” I
agree. I care very much about the poor and racial equality. That’s why if John
McCain was committed to legalizing the killing of the poor and the killing of
ethnic minorities, I would not vote for him either. But suppose you have two
candidates, one who has promised to defend and further the legalized killing of
one group of people (any group: women, minorities, disabled, unborn, poor.) You
disagree with the other candidate in areas that in their own right might be
important, but do not involve the merciless slaughter of millions of people.
Furthermore, the second candidate—whom you consider boring and
disagreeable—believes that same group of people has the right to live, and he
says he will defend their rights, and appoint judges who will defend it. Now,
which candidate should you vote for?If neither candidate were committed to the
legalized killing of people, any people, then I would say, by all means weigh
and measure those other important issues and make your choice. But can you
seriously argue that these other issues trump the killing of millions of
innocent children, not just now, but in the decades to come under a proabortion
Supreme Court that could have been a prolife Supreme Court?

The van wouldn’t start this morning.
Nathan had to coast it out of the driveway to a place where we could get the car close enough for a jump.
Then he stood in the rain outside at the car repair place waiting for a ride to Crown.
Kids were a little cranky because we were stuck inside due to cold and rainy weather.
Kids napped! Yeah! Both of them.
We went to get Daddy at work.
Daddy was finishing working on a project so we played with magnets.
Went to McDonalds for supper.
Went to Target for some items and to kill time before AWANA.
Got to church.
Audrey started screaming after being pulled by her arm up the stairs.
Audrey wouldn’t stop screaming.
Audrey wouldn’t move her arm.
Audrey calms down a little.
I move her arm.
Audrey resumes screaming.
Drop Ethan off in his class.
Drive Audrey to the ER.
Triage nurse turns her arm to take her pulse.
Audrey stops crying.
Apparently, Audrey had nurse-maids elbow
ER doc confirms that she is fine now.
Audrey gets a balloon.
We go back to church and Audrey plays happily.
Audrey falls asleep on the way home.
Audrey pukes all over while I’m carrying her inside to go to bed.
Nathan clean everything up and we get the kids to bed. 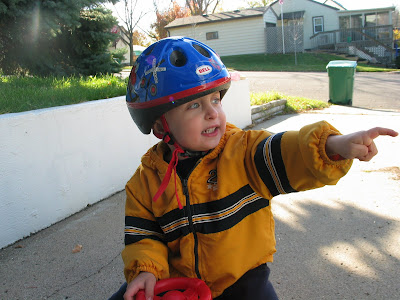 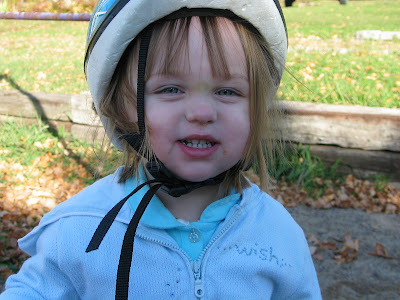 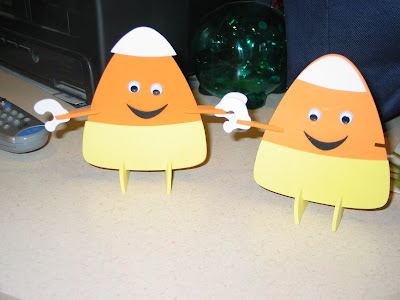 Tuesday is Story Time at the library. We missed it last week because I didn’t remember when it was, but we bundled up and took the stroller the 2 blocks to the library at 9:30 this morning. Ethan and Audrey were there with about 20+ other kids. They were learning about the letter “C”. When they arrived, the kids glued candy corn on a “C” and then sang a few songs and listened to some stories. After the stories, they all made a craft which was a candy corn figure. I’ll post pictures later. I’m at the wrong computer and don’t have the photos uploaded yet.

We’re enjoying the sunshine. It’s cooler, but we’re trying to keep from having to use the furnace for as long as possible. We can bundle up enough for now. It’s still nice enough to enjoy playing outdoors. I’m trying to have outdoor play time as much as possible since it wont be as easy to do when it gets colder. The kids love playing in the backyard. It’s their favorite play place.

Ethan is doing alright without naps, but he still has days where I can tell he could really use one. A couple days a week, I enforce taking a nap. The problem we’re really perplexed by is how much he is wetting the bed at night. He was doing really well for a long time so I’m wondering if he’s just so much more tired now that he doesn’t know what’s happening.

Audrey still naps about 2 hours in the afternoon. Ethan helps tuck her in. He climbs in her bed and kisses her and hugs her and prays for her. He is such a loving big brother. Audrey has started randomly singing, “Happy Birthday”. It’s so cute. We’ll record it sometime so you can experience it for yourself. They like to spend their indoor play time driving their little “cars” around.

That’s what going on here. I’m getting ready for my friend, Marie (Hi, Marie!) to have a baby this week, hopefully. When the baby comes, we’ll get one or two of their children for a day or so. Ethan and Audrey will love that!

I almost forgot to mention that Ethan had a great adventure last Saturday. He got to ride in a combine! He was so excited. I wasn’t there for it, but he told me about it in great detail! My uncle and cousin have a farm and they were working on Saturday so they thought it would be fine for Ethan to experience farm life. That little city boy was very happy!

On Saturday, Nathan and I celebrated our 5th anniversary- apart. I was at a retreat with the women from our church and Nathan and the kids were at home. I left a gift for Nathan and he sent one with me. It was so funny to read the card that Nathan got for me and to realize that the things he wrote on the card were almost the same exact phrases that I wrote on his card.

It was nice to get home. I enjoyed my time away, but it made me anxious to see them. I have a busy day of getting ready for tonight’s Daniel study. I’m a little behind on that so I’ll work on it during nap time.

Audrey had her 2 year well-baby checkup today. She was 27lbs, 8 oz. I don’t remember what percentage that was, but she’s perfectly healthy and good proportion for height to weight. She’s doing all the things she is supposed to be doing. I wasn’t worried, but it’s nice to have confirmation.

Have a happy Monday. 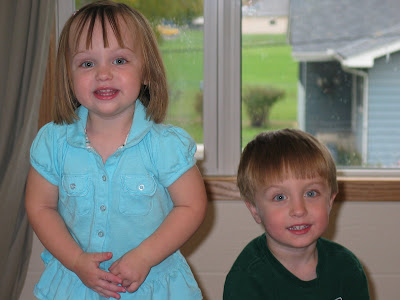